a plethora of race photos

The following collection of photos are from three races: The Maine Half Marathon, Tufts 10K for Women, and 5K for Life. Enjoy! 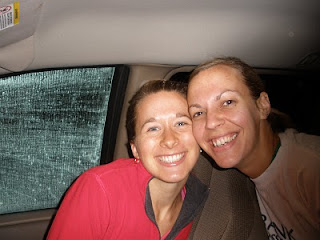 Kirsten and I are ready to go! 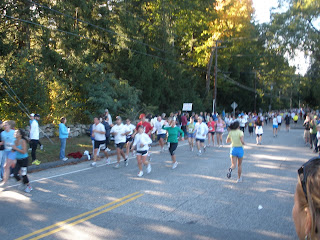 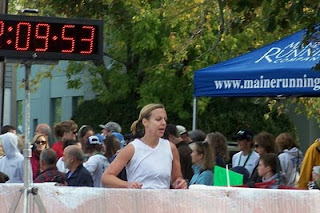 I had supporters at the finish line...BEST! 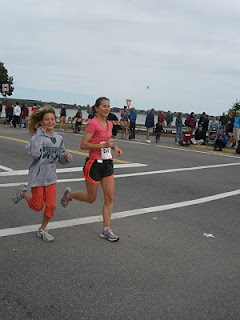 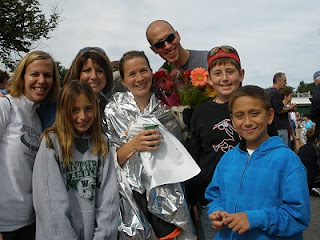 The runners and the fan club :) 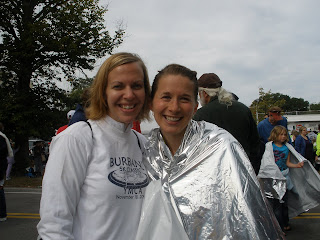 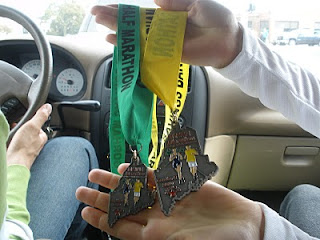 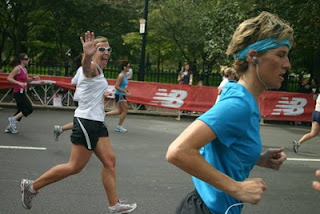 Tufts 10K Finish line. I was happy to see people I knew...but I was exhausted! 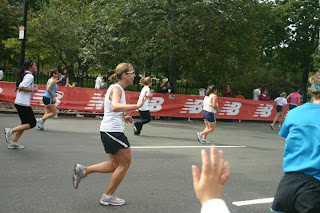 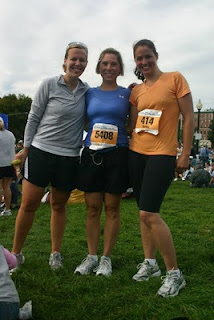 The runners - me, Jayme and Ingrid 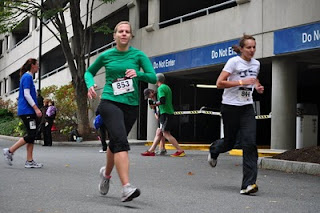 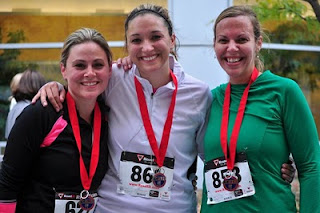 This was Erika and Karyn's first race ever! Soooo proud of them. 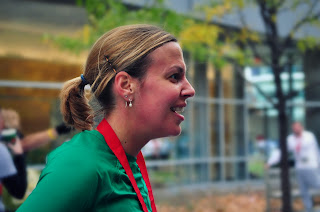 I know I have promised you pictures...and they will come. Just not yet...

For now I have to share with you my run from Wednesday night. I am staying with one of my HS girls while her parents are away, just one town over from where I live. It's a neighborhood that I'm familiar with but not so much that I know all the back roads.

I had to kinda talk myself into even getting out of the door that night, knowing that it would be dark soon, I felt tired...so many excuses! But since my girl had a ton of homework and studying I figured I might as well go out for a run before we have dinner together. I told her I'd just be going out for a short 3miler or so and I'd be back in about half an hour.

I took off towards the area where the schools are and instead of turning up a road that would lead back to their network of streets, I decided to keep going and explore a bit. I came to Main St and knew where I was. I'd been thinking about running up this street for a while (maybe a year?) since I have some friends who live off of it...I'd imagined running to and from their house... Anyway, I turned up the street and plugged along knowing that I was pushing the pace a bit, but it was enjoyable. I told myself I'd turn around at the ice cream place on the corner just over this hill...ok, over the next rise...er, maybe it's over this next rise?!

Finally there it was and I took a left onto another road that I vaguely knew. I just didn't realize how long it was... I kept thinking, I'll run into the main road soon. Soon. SOON! About 3 miles later, I did. It was starting to get pretty dark and I didn't have my reflective gear on (stupid!) so I was getting a bit nervous as there wasn't a sidewalk for a bit. Just as I was coming to the start of the sidewalk, I saw a guy headed my way from a side street. He was going along at a pretty good clip and I was just ahead of him. My pride got the better of me at this point... I did NOT want him to pass me! So I kicked it into high gear until I reached my turn off.

So I made it back to the house after a bit more time than I had anticipated, excited to see just how far I'd gone. Turns out, the total distance was 4.82miles. My time was 42:43. Readers, this is the fastest pace I've ever gone... 8:51min/mi. I am pleased. By no means am I fast...but I am getting faster.

It has been an interesting two weeks! I'll start at the beginning...

Saturday, Oct 2nd, my friends and I packed up the minivan and headed for Maine. We got to the expo for the Maine Marathon, Half Marathon and Relay around 4pm. Honestly, the expo left a little to be desired (no GU for sale!), but the swag bag more than made up for it!

We received numerous snacks and sample products as well as a $500 "gift card" from a company called Red Star World Wear...not sure yet how this works or if it's some sort of scam. We also picked up our bibs and shirts. The bibs had our names on them! That was the first time I've received my number with my name on it. It was pretty cool. The shirts are long sleeve tech shirts...but they'd run out of my size so I'm waiting for them to mail me one. It's really nice and I can't wait to get it. Also, the bag itself was awesome! It's a drawstring knapsack that is lime green with reflective material on it. It has become my new gym bag. I love it.

We made it to our residence for the night...my friend's brother and sister-in-law happily put us up for the evening after feeding us a delightful dinner of spaghetti and (turkey) meatballs, garlic bread and salad. Bedtime was 9pm.

The alarm went off bright and early at 445am. Kirsten had a bagel and coffee waiting for me when I woke up. She's such a dear friend. :) We were off to Portland by 6am...the sun was just starting to poke up over the trees, the sky was clear and it was cold!

By the time we got to Portland, the temp had warmed up to about 45 or so and the sky was still a crystal clear blue. Perfect running weather! The start was at 7:45am so after a brief warm up, Kirsten and I took our places in the starting corral. She was at the front, I was at the back.

The course was absolutely beautiful and challenging enough to be interesting...but not too tough. We ran along the cove at the beginning and end, which was nice...but breezy. The course took the half marathoners up to Falmouth and back while the marathoners kept going up to Yarmouth. Kirsten said the hills around mile 16 were pretty brutal. Thankfully, I was spared that, but the hills that were on my course were enough for me. I knew that I probably would not have been able to do the full marathon...so maybe it was a good thing that I backed off with my injury and only did the half.

I checked my time around mile 8 or so and decided that I would not be able to make a PR (personal record) this time around. However, when I got to mile 12, I realized I may actually be able to pull it off! I picked up the pace a bit and pushed myself hard till the very end...and ended up with a time of 2:08:08, nearly a full minute faster than my previous PR!!!! Needless to say, I was very happy at the end of the race and very satisfied with my time.

I was able to get a shower and cleaned up before heading back out to catch Kirsten coming across the finish line of her third marathon. She came in at 3:31:something. Absolutely amazing! It was a rough course, but she did great!

We were both pretty wiped out, but met up with her parents for lunch at Panera (a well deserved bread bowl of black bean soup...yum!) before heading to JM's parent's house for a birthday celebration. By the time I got home, I crashed into bed and slept for 12 hours!

The next day, I felt great. The day after that, I felt even better...and went for a run! I didn't run too much that week since work was busy and we had two retreats we were planning for. One of them I attended, getting just about 5hrs of sleep on Friday and Saturday nights. Thankfully, I was home on Sunday night and slept for 12hrs before getting up for yet another race!

Monday, Oct 11th, was the Tufts Health Plan 10K for Women. Thankfully, it didn't begin until 12pm. It was in the city, starting and finishing on the Common. Picture this: 10,000 people - the majority of them women - crammed together on the Parade grounds of the Common. Lotta people, less than a lotta space. Anyway, it was just a bit too crowded for my taste. I must admit, the weather was really nice. High 60's partly cloudy. Who woulda thought I'd be wearing a tank top and shorts in October?!

I picked up my number (also had my name on it!) and my shirt. No swag bag...which was very disappointing. There were a lot of vendors, but I didn't feel like wandering around, fighting the crowds so after hitting up the portopotties (there were plenty, unusual!), I camped out and waiting for my friend to arrive.

We made our way over to the starting line (CROWDed!) and began the slow walk toward the starting line. There were so many people in front of us that it took 10min to get to the start! Once we got going it was interesting. 7500 people ran this race...and it was only 10K...which means it never really thinned out. I was bobbing and weaving people the entire way.

The course was really nice and one I'd run a number of times before so I knew the elevation changes and zipped up the inclines (I love the uphills!). I was feeling pretty wiped out after the half then the retreat so I pushed myself but knew it wouldn't translate to a PR. I crossed the finish line in 1:01:28 (9:54min/mi). I'm satisfied with the time and was proud of my friend who came in about 30sec behind me. She was hoping for 10-10:30min/mi and she did exactly 10min/mi!! Great job!

Where this race lacked in a swag bag, it made up for in the food at the end. There was TONS of it. Bananas. Bagels. Crasins. Larabars. Granola bars. Powerade. People were getting boxes and just loading up. It was crazy! I grabbed a bagel and a banana along with some liquids and got outta there to a place with a little less people. After hanging with some friends for a bit I headed home on the T and vegged out the rest of the day. It was awesome.