I've racked up some pretty awesome medals in the past 4yrs of running races.  Some are pretty stinkin' sweet and some are pretty dumb...but hey, a medal is a medal.

So I've kept them all (and all my bibs too...I'm a geek, sue me) and thought it was time to show them off to you. 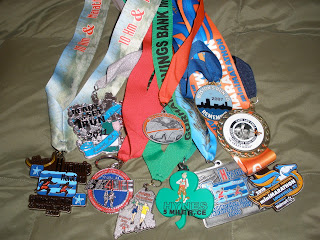 See that little green shamrock in the front?  That one and the oval one just above it are my two least favorite...but like I said, a medal is a medal.  Even if it's made of rubber like the shamrock...
There are 5 half marathon medals: 2 for Hyannis, 1 for Kentucky, 1 for Maine and 1 for Boston.
The 5K for Life (red ribbon) is also a key chain.  Double Duty!
And finally, the one in the middle on the right is for my first and only 25K around Cape Ann.
Below are the medals that I am the most proud of...they are from my 2 marathons, obviously!  I have to admit that Chicago's is cooler, but Kalamazoo holds a special place in my heart, and it was the very first one (it says that on the medal!).  So I love them both equally.  :) 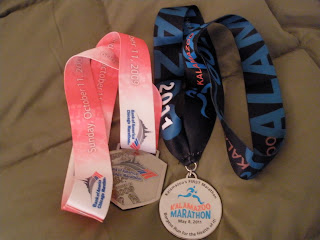 i should tell you...

I need to tell you all about the Kalamazoo Marathon!!!  It was an exercise in mental strength as well as physical strength.  It was fun, tough, challenging, exciting, and often, all of these things at once!

The day started out clear and cool.  Just about 45deg or so but there was not a cloud in the pre-dawn sky.  My parents and I arrived at Tent City (the start and finish line area) and were encouraged to stand around on cold, wet grass as we waited for the start.  Thankfully I didn't wear my running shoes as they would have been soaked by the time I started the race.  I wore my (new!) crocs and took off my socks so they didn't get wet either.

I met up with my fellow 50 State Challengers and took a group picture.  It was cool to see everyone together and know that they were just as excited about this race as I was!  I chatted with a couple girls before the race, it was the first marathon for each of them.  I gave them some seasoned advice (yeah, right...) and just told them to relax and have fun.  The main goal was to finish and have fun doing so!

At this point the sun had started to come up over the trees and we got into the starting corral.  I took off my track jacket and pants but still had on my long-sleeved shirt because it was still pretty cool.  I knew the day would warm up so I made sure my parents were along the starting line crowd so I could toss them this article of clothing.  It was NOT a throw away shirt...it's one of my faves!

After a well sung National Anthem and a few unheard announcements, the start gun went off and the marathon had officially begun!!  I found my folks and gave them my shirt since the sun had come up and was shining brightly, I knew that I'd be fine in my tank and capri's.

The first 7miles or so were a breeze.  There were a few inclines/declines but it was mostly flat.  I saw my grandma and uncle just after 1mile.  I ran 10min/mi for the first 10K but after seeing my parents just before mile 8 (and also just before a rather large hill) I began to slow down a bit.  My next 6mi were run at a 10:30 pace.

The course was in some places flat for miles then we would run over rolling hills, then flat again.  The terrain changed quite a bit...which is nice.  The thing that didn't change was the sun beating down.  Not much shade on this course.  By mile 19 I was pretty wiped.  Thankfully, I knew that at mile 21 I would see my parents again.  (They showed up at 17 as well.)  I got another swig of coke to calm my stomach, which was not feeling so great after so many Gu's and GuBrew.  And I headed off (walking) to climb a pretty serious hill.

I began chatting with a woman, Mary Francis, at this point, commiserating about the challenging course.  We kept up with each other until the last mile.  But before we got there...we had to pass through the "Encouragement Zone."  Meant to be, well, encouraging and pump runners up...I have to tell you...I hated it.  Imagine being so incredibly tired, both physically and mentally.  Imagine that you have no "nice" left in you.  Okay, now imagine that someone is bouncing along side you and in an uber chipper voice saying "You can DO IT!  You look GREAT!  You look STRONG!"  Etc...  After MF and I got through the "Encouragement Zone", I looked at her and said, "I'm not sure about you...but I wanted to punch that girl."  She enthusiastically agreed with me.  It's just hard to be so excited and peppy when you feel like you want to lay down and die.

Anyway, we made it to mile 25 where there was another significant hill waiting for us.  I decided that there was no way that I was not running the last mile and no way I was finishing in over 5hrs.  So I said farewell to MF and plodded my way to the finish line.  It was painful and mentally challenging...but I did it!!!

My goal was to beat Chicago's time (5:15:48), my secret goal was to break 5hrs...and my official time was 4:57:27!  I made both goals!  I crossed the finish line, received my medal, was wrapped in a mylar blanket and grabbed some water and gatorade.  I found my parents and asked them to wait while I gathered my senses back.  After a good stretch and some replenishing liquids, I smiled for pics and talked to my supporters.

My reward was just what I wanted:  a cheeseburger with fries and a locally brewed adult beverage.  And after a few restful days in Michigan I headed home to Boston.

It was another amazing journey and one I couldn't have done with out taking you along for the ride.  I hope you'll join me and my silly stories and posts as I train this summer for Marathon #3!!

I'm getting a bit ahead of myself...  But I can't help it!  It's exciting!  I registered yesterday for the Amica Marathon in Newport, RI.  A few friends are signed up as well and I think it's going to be a super fun weekend.  The race is on Oct 16th in Newport, all along the coast.  Definitely check out the course map, it's going to be a beautiful course!

The nerves are fading, the confidence is building and the excitement is taking over!  I can't wait to get to Kalamazoo, to head to the Expo, to drive the course and to run this marathon!
Posted by Unknown at 5/04/2011 10:32:00 AM 2 comments:

I know, I know...I'm prepared and I will rock this marathon.  That's not what the anxiety is about; well, not anymore.  Now begins the "What do I pack?!"  "What is the weather going to be like?!" (and obsessively checking it every 2-3hrs to see if it's changed.)  "Where are my favorite socks?!"  "Shorts/capri's...shorts/capri's...shorts/capri's?!"  "I hate flying, I hate flying, I hate flying!"  "Long sleeves or short sleeves or sleeveless?!"  "Where will I attach my bib if I have layers?!"  "Do I have something warm that I can throw away at the start?!"  "Will I see my family AT ALL on the course?!"

You see, I'm freaking out.  I can't even look at the Kalamazoo Marathon website without freaking out!  I think I'm more nervous and anxious about this one than about my first one.  It's kind of like how musicians are more nervous about their sophomore album than their first one because people are more likely to judge them if it goes horribly bad.  Well, I don't think this will go horribly bad...but there is a possibility that it will.  Aaaaaaaaaaaaaaaaaaand....I have to fly to get there.  I hate flying.

So, if I can't voice my anxious thoughts here, where can I voice them?!  That's what this silly little blog is for!