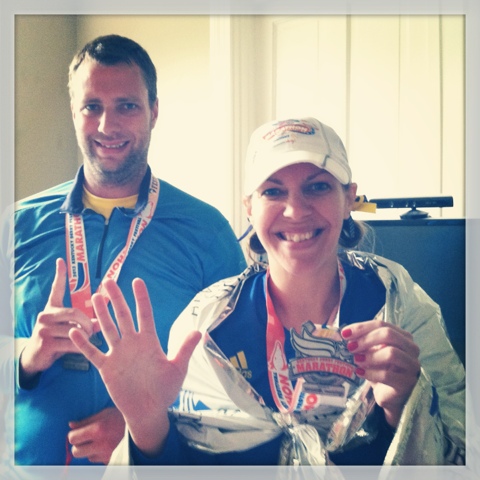 Got our bibs at the expo! 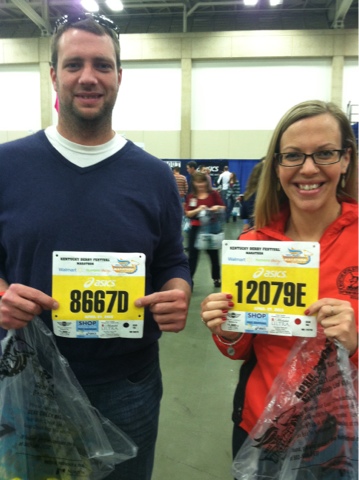 I made it! Smooth flights the whole way. And when there were a few bumps, I calmed my nerves by repeating, "I don't like it but I'm not worried." It worked! 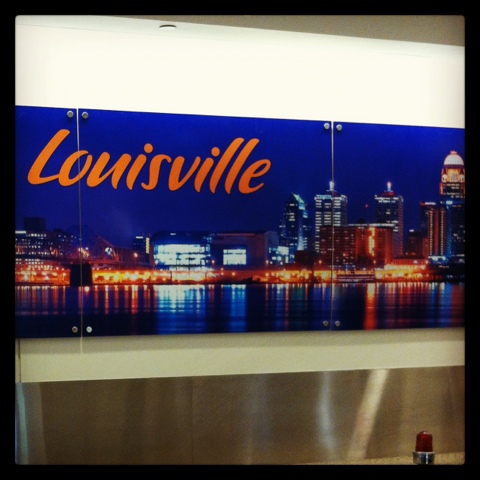 There is only one thing I can say about today's photo:  FINALLY!!!!!!!

I'm not liking the weather forecast for Saturday... 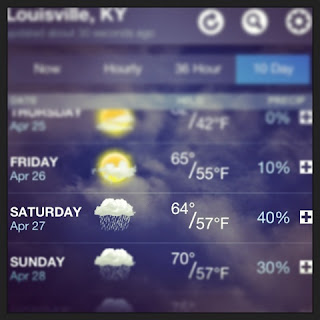 My current favorite electrolyte drink is nuun.  It's not nearly as sweet as Gatorade or Powerade and tastes awesome.  I find I often have to water-down regular electrolyte drinks and I don't have to do that with nuun.  (I even do that during races...take one cup of sports drink and one cup of water.)

nuun is really easy to keep with me all the time if I'm feeling particularly dehydrated.  There are 12 tabs in a little tube, just drop one in your water bottle of choice, let it fizz till it's gone, and enjoy!  I have tried the tri-berry and citrus fruit flavors, and I just recently purchased the lemon-lime and strawberry lemonade flavors.  I can't wait to try them out during Marathon Week! There's a lot of conversation on the Kentucky Derby Festival Marathon Facebook page about how people can honor the events/victims of the Boston Marathon bombings.  It seems most people want to show some kind of support to our city and our people.  Very cool.

So, I went shopping today for some blue and yellow items (the BAA colors) to show my support, as well.  I got something for my brother too.  I can't wait to run in honor of Boston. 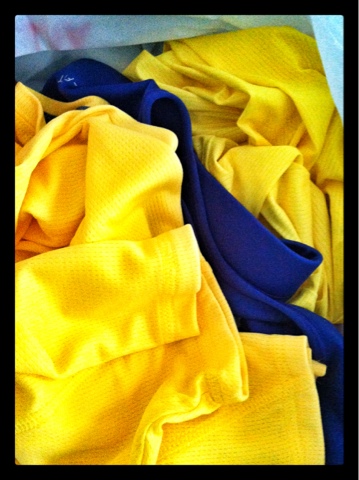 With one week to go till we marathon in Louisville, it's time for a photo countdown! Today's picture is today's last "long" run. It wasn't a super long one as there is only a week to go...but long enough.

For the record, I went a bit further (8.31) than what the watch says. Nike+ is always just a bit off. But that also makes the pace a little faster too. Hey, I've got my pride... ;) 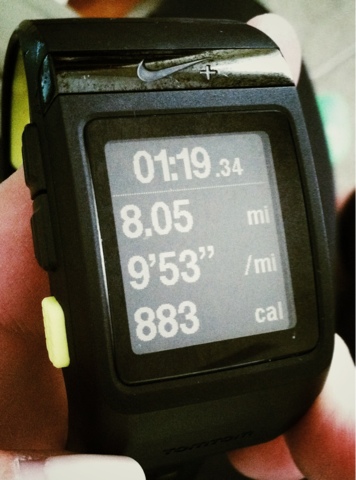 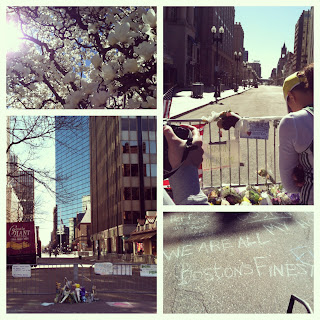 A work project took a couple coworkers and me to Boston yesterday.  We wandered from the Common and Public Garden, down Comm Ave, over to Newbury Street, and finally up to Boylston.  As I gazed down at the finish line and the photo bridge that is still up crossing the street, I couldn't help but see the stark contrast between last year and this year.  It's not supposed to be like this, was all I could think.  Honestly, it was hard to stand there, thinking about the wreckage and horror that took place on a day that was supposed to be glorious and celebratory.  This bustling street was empty and blocked off.  It's not supposed to be like this.

Forgive me as I try to process my grief.  This event hit close to home for me, in more than just the literal sense.  First, I am processing this as a Christian.  Trying to wrap my head and heart around the fact that there is evil in this world and the fact that God is still in control.  One day, He will make this world right.  But it's not time for that yet.

Second, I am processing this as a Bostonian.  I've always felt a little bit insulated from major attacks because we are so close to NYC and Washington DC.  Naively, I never thought something like this would happen to Boston.  But it has.  And one thing I've learned from living here is that Bostonians are tough, tough people.  We will not shrink back or stand down.  We will fight for our neighbors and our community.  And we will not cower in fear, but stand up in strength.  Stephen Colbert put it best.  Also, check out the National Anthem at the Bruins game last night.  Breathtaking.

And thirdly, I'm processing this as a runner.  It makes me so angry that whoever did this choose to attack, not only our city, but our marathon.  The realization that they stole the joy and wonder from the finish line of the greatest race (my favorite marathon!) and turned it into something ugly...well, it just makes me sick.

There is a sign at work (I work at a church) that simply reads: forgiven.  I typically see this and silently thank God that I am forgiven.  But as I read that sign on Tuesday, I prayed for the ability to forgive those who caused this pain to my city.  To forgive them as someone who was made in the image of Christ (though they may not know it); to forgive what they did to the City of Boston and so many of her people; and to forgive what they did to the Boston Marathon.  I'm not there yet.  It will take some time, maybe even a long time, and that is okay.

There is no place like Boylston St on Patriots Day.  It is a tunnel of cheers from spectators and runners, alike.  There is not a buzz of excitement but a drone.  I remember turning onto this street last year, thinking how great is my city, how awesome is my marathon?!

Yesterday, that all changed.  This morning my heart is very heavy.  The sense of excitement and accomplishment on Boylston St was taken away.  Ripped from our city by two deadly bombs.  There is no explaining it away.  There is no understanding of why it happened.  I am angry and I am saddened.

The one thing to do for Boston, for all of us, is to pray.  Pray for healing, resilience, strength.  There is more good in this world than evil.  Good always, ALWAYS, overcomes. 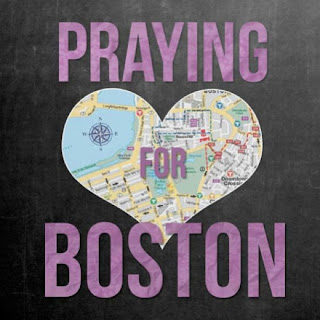 I'm guessing you all liked to read about my brother!  Yesterday's post had the most views since we journeyed to the Boston Marathon last spring!  I'm sure he'll appreciate that kind of support on marathon day as well...but we'll get there.

For now, I'd love to tell you about my bootcamp class last night.  It was like, whoa.  Not kidding.  Remember a few days ago when I said that one day burpees may kill me?  Yesterday, I thought that day may have come.  The instructor informed us that it was a fire drill style class, which meant that every time she yelled, "Fire Drill!" we had to stop what we were doing and do burpees then squats.  We started with 5 and each time after that we added 5 (the second time was 10, third was 15...you get the idea).

I think on another day, I may have enjoyed this challenge and welcomed how hard it was.  But it was hot in the room and I had just run 19mi the day before.  I was in no mood for 75 burpees spread out over the course of an hour.

When combined with the other exercises she had us doing, by the end of the hour I was toast.  I was a sweaty, jelly-limbed mess (especially my arms)!  But as much as I hate that feeling in the moment, afterwards I'm always glad for it.  Like today, I'm glad for the soreness in my arms and I'm glad that I'm not too sore in my legs - I honestly expected to be hurting worse. (I'm not kidding...she was intense yesterday.  Maybe the nice weather brings out the beasts in these instructors?!)  But the fact that I'm not means I'm getting stronger.  Wahoo.  I'm actually thinking of switching gyms so that I can attend one that provides these classes all the time, instead of hoping to find a groupon to purchase.  We'll see what happens.  For now, even though I feel like I'm dying during it, I'm thankful for the motivation to attend these classes and for getting stronger.

Ben is my brother.  He's almost exactly (like, nearly to the day) 18mos older than me.  He lives in Louisville, KY.  We get along well now that we're adults...but it wasn't always like that.  I mean, whose older brother didn't beat them up, tease them, and aggravate them on a daily basis? 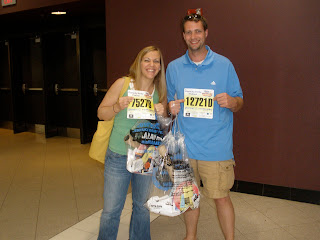 Ben likes to cycle.  He's got two or three really nice road bikes.  He's never been much of a runner.  He once told me (I believe it was before my first marathon in '09) that he would NEVER be a runner.  He would rather shoot himself in the foot than run 13.1mi.  Fast forward to the spring of 2010 (see pic at right...).

He ran his first half marathon (I did it as well, obviously!).  He has done the Triple Crown of Running held in Louisville every year since then.  5K, 10K, and 10mi races held two weeks apart.  Three weeks later is always the Derby Festival Marathon and Mini Marathon. 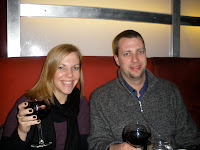 This past December I was with my family in Louisville after running the Memphis Marathon.  My brother casually says to me that marathon training has begun.  Wait...WHAT?  My brother who swore he would never run is training for a MARATHON? 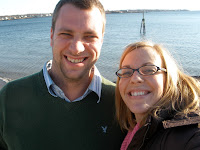 So we've been training together but separately for the past four months, getting ready for his first, my fifth, 26.2mi.  It hit me on Saturday that my brother is *actually* running a marathon when I received this text from him:  "No wonder the first person to run a marathon died at the end.  20mi was brutal."

I read this fun article this morning, and felt it worth sharing.  My favorite line is: "I guess we know why baseball is the American pastime. Whatever, pass the Pringles."

Also, soccer players got skills.  That's all.  Have a delightful Friday!

I didn't go to my usual Tuesday Bootcamp yesterday.  Instead, I stayed home.  But I did workout!  I got out my new yoga (repurposed for yesterday's workout) mat and went to town on this little - but don't let that fool you - list of exercises found on a fun blog - carrotsncake.com. 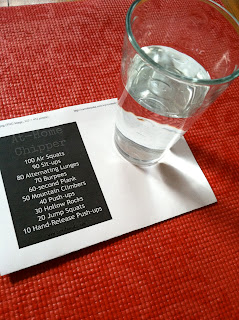 This was no joke.  I took it in stages, and had more than a couple water breaks, and got it done.  It wasn't quite as butt-kicking as bootcamp but had I not rested as much in between some of the sets, it would have been. Also to note:  Burpees may one day be the death of me.

I am glad for another way to mix things up and do some different workouts.  Tomorrow will be my first run of the week.  (It's crazy that I'm not running so much, right?  But I'm running better because of it.  Hmmm)  And there's that issue of a 20mile run happening on Sunday...  Anybody wanna join me for a few miles?!
Posted by Unknown at 4/03/2013 03:47:00 PM No comments: